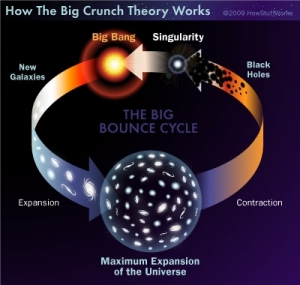 Over the last few years, hundreds of millions of ordinary people have become online content creators. The Internet used to be a one-way street of consumption (Web 1.0 when advertisers sold to users), but now it’s a conversation where even the most lay users publish and user-generated content (UGC) rules social and consumer activities.

Social media lends users networked, searchable content megaphones. User empowerment as publishers has become quotidian. Note the great reduction in censures berating the narcissism of content creation. People who still think Twitter is stupid or for alerting folks that you’re driving to work are considered ignorant and are becoming a minority (and that was in 2009).

But let’s not forget that (theoretically) since the beginning of “time,” the universe, earth, and this planet’s inhabitants from large to microscopic have existed and died in a series of bangs and crunches. Expansions and contractions. Even in human birth, the body contracts and expands to give life to the new.

Our shared egos and stories, our willingness to accept new fads and to dive head first into change can only hurtle with increasing velocity for so long. Eventually, the asteroid hits and kills the species, the glorious empire falls, the plague wipes out the population.  The bang and crunch cycle is macro and it’s micro to the point of imperceptible, compounding tendencies away from the status quo.

The shift won’t be crunchy (instant and dramatic) but more of a slow crinkling, like an irksome moviegoer’s candy wrapper sliding between sticky fingers for the entire film.

In Part 2 of this article, I explore the shift from Web 2.0 to Web 3.0, the Internet of Things (IOT), a semantic linked data network where the Edy’s in my freezer, my Yelp review of a local frozen yogurt joint in Decatur, GA, my Kroger card shopping history, my upcoming Vermont country vacation near a dairy farm, and my recent viewing of an ice cream sandwich recipe on cookinglight.com synchronize. That is exciting.