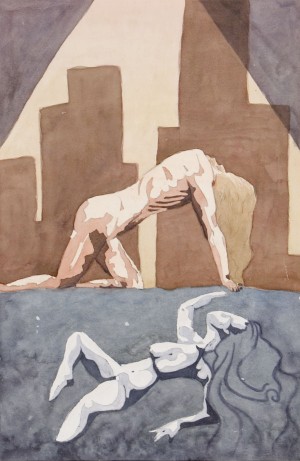 The internet is a place where the birth of a single character is eternal. Blessing and curse in concert. Ultimate recorder of civilization- but is it worth the hard drive real estate? How long until we max out the digital space? 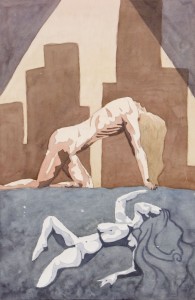 How will the earth store our exponentially increasing input of data mixed with blood and dust? The master computers in secret rooms will shrink until near-infinite data is in the expanding cloud. Just as the same matter that is in our water was once in a dinosaur’s body, our text messages, tweets, and energetic outputs will somehow live on in this bionic state of existence into which our baby planet has morphed. This is not a forested plains land of indigenous peoples. This is not an unpolluted crystal sea. This is a greying, littered land of scars, where human action on the earth at large, and human interaction in the microcosm of our increasingly antisocial relationship conversation has departed from anything we could have been programmed for. I might call some of our cultural norms unnatural, but really anything produced on this planet must come from this planet.  Skyscrapers are natural, because metals were already here. We simply shaped them, maybe in a likeness of some god.

Some Native Americans believe that we store all our experiences in our bones. Assume that the pain body lives inside us, as Eckhart Tolle writes in Be Here Now. Psychology and medicine have repeatedly evidenced psychosomatic illness: your body reflects your mind. More than you realize.

If we are organic human bodies roaming this planet, cell phones in hand, relationships drastically altered as for the way our bones store their effects, their digital marks on each of our individual online clouds, how will that affect the collective unconscious? Has it already changed? Jung?

If Ayn Rand is correct, that “the skyline of New York is a monument of a splendour that no pyramids or palaces will ever equal or approach,” then is the skyline of our digital empire in the cloud equally or comparably splendid?  Or is it too confusing in its very essence of lacking tangible metals from a steel mill and sturdy bricks and mortar?