Why We Hate Skyler White

Do you think Skyler White is a total buzzkill on Breaking Bad? Do you full out hate Skyler?  “…Male characters don’t seem to inspire this kind of public venting and vitriol.” In an 8/23/13 op-ed for the New York Times, Anna Gunn, who portrays Walter White’s wife, discussed what’s behind the vocal public contempt for Skyler, which has blurred into “loathing” and even death threats against the actress. Skyler White – I Have a Character Issue – NYT 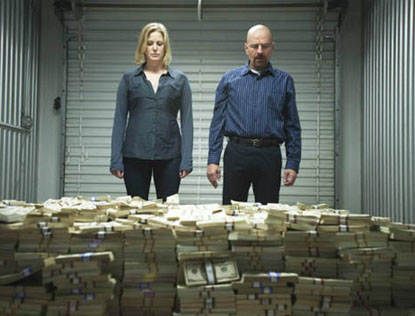 Anna Gunn’s op-ed explores why viewers are so quick to hate TV wives like Skyler, Carmela Soprano, and Betty Draper while their husbands, the protagonists, commit crimes against humanity, cheat, lie, manipulate, and endanger their families, but rarely inspire such “homicidal rage” toward the Don Draper/Walter White types or the actors who play them. Anna Gunn’s article made me rethink why I used to see her character as a killjoy, annoying, or a nag as she’s been pegged.

Gunn makes an excellent point by complimenting Vince Gilligan and the Breaking Bad writers for painting an ever-evolving Walter White as complex and likable “despite his moral failings.” And yes, there is “a natural tendency to empathize with and root for [a show’s protagonist].” Still, the fact that everyone so loves the “deeply flawed yet charismatic genius” that is Walter speaks to the highly skilled storytelling that has earned Breaking Bad titles like “best show ever.” Maybe the writers of these top dramas aren’t making the wives likable enough. Maybe it’s a learned, default cultural interpretation of wives as automatically antagonistic to our beloved, flawed male protagonists. Regardless, this is an important conversation because our society is consumed with and influenced by media now more than ever:

-statistics from Miss Representation with sources (2011-2012)

In the documentary Miss Representation (click to watch), filmmaker Jennifer Siebel Newsom exposes disturbing realities about how women are portrayed by the media and “under-represented in positions of power and influence.” Newsom demonstrates the relationship between the lack of powerful women (characters or real ones) depicted by the media and entertainment industry and the lack of female leaders in politics, business, etc. In summary: “You can’t be what you can’t see.” -Marian Wright Edelman 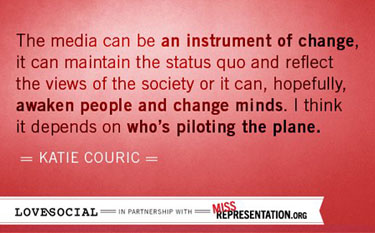 There are TV shows with strong, likable female leads, but nowhere near as many as those with male leads whose adoration by viewers exemplifies an obvious double standard given the wider range of character traits, flaws, age, and physical appearance in male leads. This is one reason I love shows like Lena Dunham’s Girls on HBO and Jenji Kohan’s Orange is the New Black on Netflix.

One aspect of Miss Representation that relates to television and marketing is the business of commercials. Essentially, brands want to advertise on content that mirrors their messaging. Marketing is about making consumers uncomfortable: if you instill in a consumer a sense of urgency that they need a product to make themselves better, happier, sexier, smarter, younger, prettier, richer, etc. then you’ve caught their attention. In general, TV shows are written to reflect their advertisers’ brand values and messaging so that they will keep advertising to an insecure consumer. Characters and storylines often perpetuate the beliefs that make viewers insecure, i.e., better consumers.

Media companies, networks, advertising conglomerates, and ad agencies are male-dominated financially, philosophically, and visually – pure numbers. While the Skyler White conversation has many variables, it’s important to keep the undeniable reality of our gendered media in mind when deciding whether you think Skyler hatred is a symptom of a larger cultural problem or is simply the result of storytelling in the modern age, where character-bashing is more public online.