Why a 1960s Ad Man Understood Social Media Better Than You

Howard Gossage believed that most of the advertising of his time was manure. The Socrates of San Francisco died more than forty years ago, but his radical approach is as important now as ever. 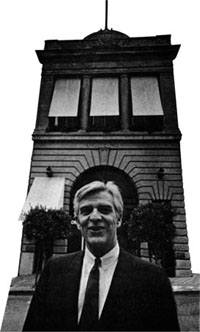 Gossage was irreverant, inquisitive, and creative. At a time when agencies encouraged increasing media buys for their own profit, Gossage worked on quality over quantity, and even instructed some clients to reduce their ad budgets. He eschewed TV. He helped launch the environmental movement. David Ogilvy called him “the most articulate rebel in the advertising business.” Gossage was an iconoclast and proponent of using advertising to effect social change. He cared more about ideas than media.

When Gossage was in the ad business in the late 1950s and sixties, you could reach 85% of the U.S. with three TV networks and four publications. The options for sharing information and stories were a tiny fraction of modern media, but HLG was a prescient proponent of interactivity. His most important principle will outlast this month’s shiny new marketing toys:

Gossage was talking about conversation long before Twitter. Our age is one of digital marketing buzzwords that mean little beyond having secured standing room on a crowded bandwagon, of an obsession with social media too often devoid of strategy and technique. Now we have tools that make the conversation more convenient and immediate, but this has made us lazy.

Tired of reading articles about how to “measure the ROI of social media”? Quit reading them. Turn off your phone, sit down (better yet, stand up) and take the time to write interesting copy, inform, incite. Spell check.

Gossage transformed a pedestrian category, gasoline, with a campaign that directly acknowledged that most service stations were identical, while satirizing “advertisingese”: 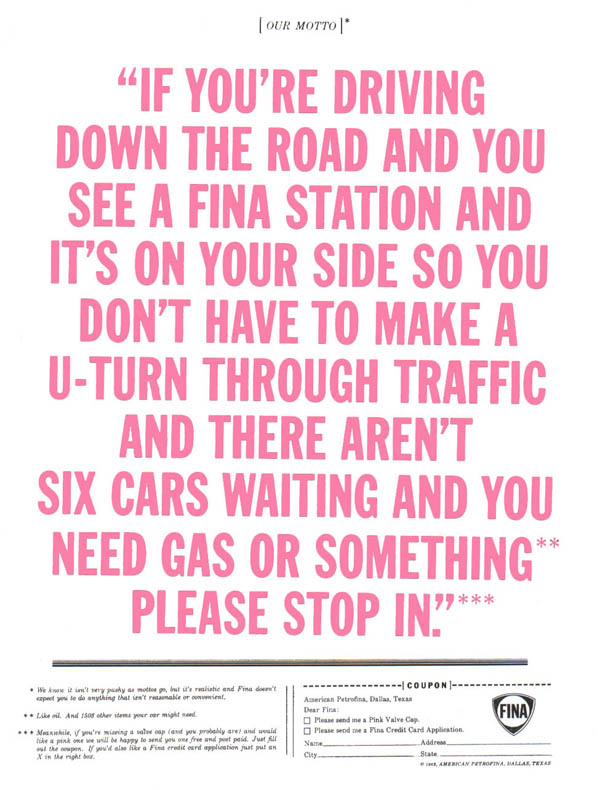 Fina didn’t pretend to be your friend or solve your problems. Fina acknowledged reality in a conversational way. Fina sold petrol.

Ask customers about their pain points then speak to those negatives in a new or helpful light. Brands aren’t people: brand messages that seem personal simply because they begin with an @ still must offer some value, honesty, or fun if you want the audience to care, participate, or purchase.

Unlike the above ads typical of his time, Gossage based his work on the belief that the consumer deserved to be treated with some modicum of respect. Ogilvy agreed: “The consumer isn’t a moron, she is your wife” (1955). Gossage went a step further with campaigns like the one that saved the Grand Canyon from being flooded: 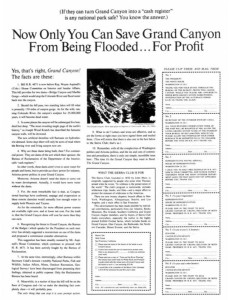 His point, recalled by then partner Jerry Mander, was this: “You can’t just make people feel bad, you have to give them an opportunity to do something.”

Direct, honest, creative messaging that acknowledges the realities of the transactional relationship beats a feigned or forced friendship and unrealistic promises. It was true in the sixties and it’s true today, especially on social.

We relish our digital two-way street, opine about the “conversation” until its terminology has become hackneyed, yet many brands still turn off customers with their attempts at tone. Before you hit “send,” ask yourself if the message is interesting and real, or simply, WWGD?