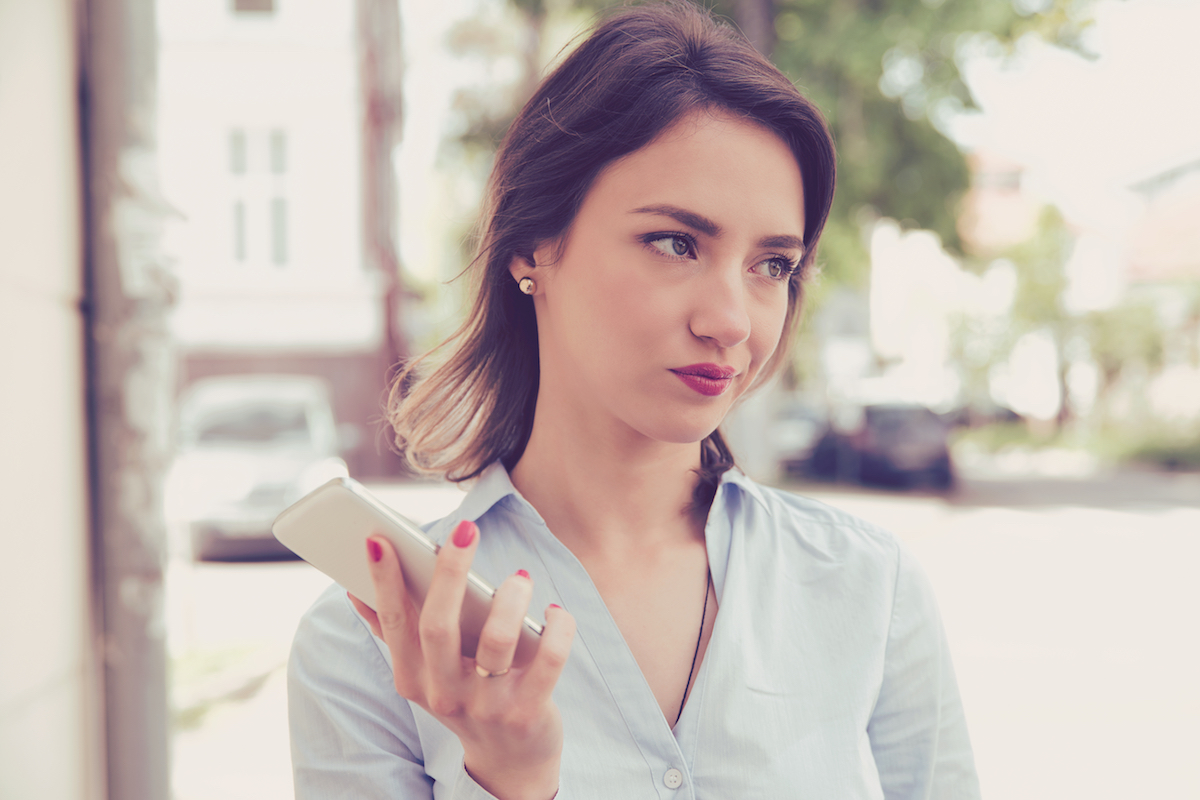 Two parts:
1) The story of my non-friend Matt, the annoying Facebook power-user (energy drainer).
2) Your to-do: unfriend your Matt. Healthy social media boundaries that may seem rude are digital survival.

I have an acquaintance we’ll call Matt. I met Matt about seven years ago through a mutual friend whom I no longer know. Matt friended me on Facebook the day after we met. We’ve met in person twice, the last time over five years ago. We live in different cities. 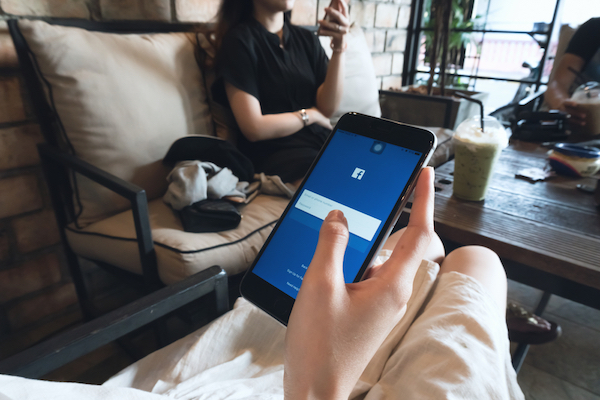 Matt seems to watch my (very infrequent) Facebook posts like a hawk, as he comments on nearly every one. For several years, I averaged about three posts per year. This year I’ve been posting more often because I started a YouTube channel about career advice and Facebook is one of the most effective ways to share this content. I feel a little gross every time I post on Facebook, but it’s the easiest way to let more friends know about my videos, and many have come out of the woodwork with kind support. Yes, there is some good on FB.
–
I don’t trust Facebook. I’ve been effusive in this blog and on podcasts about its ill effects on society. This sums up my feelings.

–
I don’t like to feed the Zuckerberg money-printing machine with my thoughts and likes and keywords, let alone my conversations. I think people who spend a great deal of time on Facebook and post a lot, who use Facebook Messenger in place of text or email, are often ignorant about the precious personal information they’re giving away.
–
Facebook is an addictive product that we should view like we do nicotine, alcohol, and fast food – it’s produced by a young, entitled, insanely wealthy company that has always asked forgiveness, not permission. Facebook is a drug: the dopamine it produces is addictive. The lifestyle and apparent happiness level comparisons it invites damage users. The research is clear. We seek to limit our intake of all other drugs. Make the connection.

You probably have at least one Matt in your Facebook network. He seems to spend an inordinate amount of time on Facebook, noticing your every post. He comments on almost everything. He wants to incite debate and further comments. He is addicted to notifications. He posts lengthy comments, sharing his opinions, seeming to invite controversy. He is a time suck at best and a pollutant at worst. 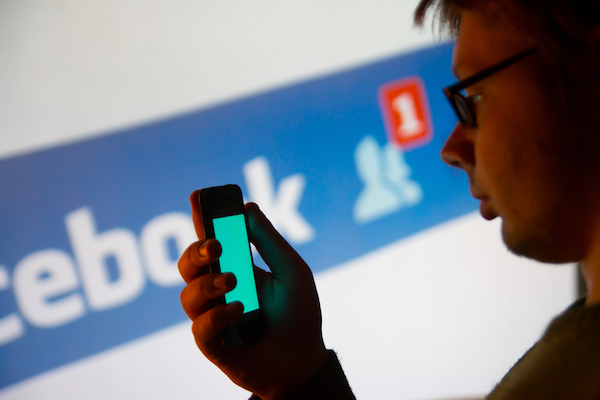 Matt wants to be seen and and heard. Matt’s dopamine production is attuned to Facebook notifications in the purest Pavlovian sense.

A couple times a year, I will share an Instagram video from PETA or Jacked Animals. I don’t push my mostly plants diet beliefs on anyone, but sometimes I just want to remind my friends that if we all ate less animal, our health and planet would be better off. The way I share it, it’s a simple, undeniable, and short message. No vitriol and not there to incite and host a debate about veganism.
–
Frankly, you can’t refute the fact that factory farming is animal abuse that’s awful for the environment; and that the standard American diet (SAD) causes disease and rising healthcare costs. I am past the point of being a 16 year-old interested in debating meat eaters on any of this. I know the facts, and that’s enough for me. Unfollow me if you don’t want to see the occasional post saying something like this: 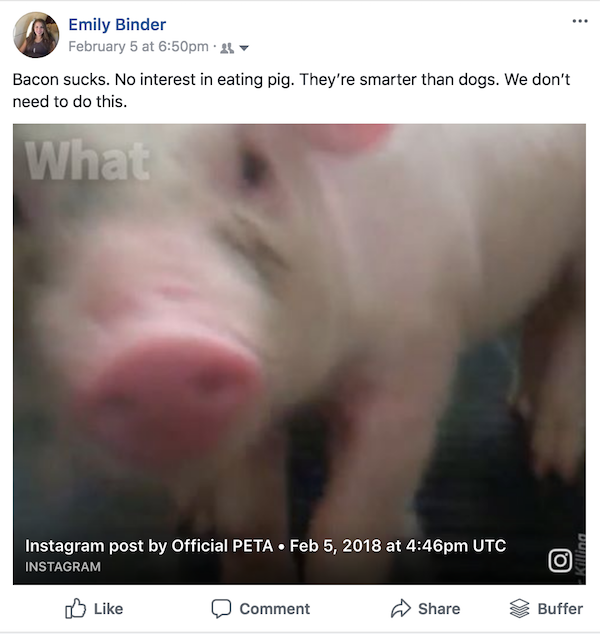 Matt posted a three-paragraph comment on this asking about the minutiae of my diet and asking me if oysters are sentient and where I draw the line. It’s a boring debate in which the aggressor tries to poke holes in the argument that advocates for animals or the planet by changing the subject to speciesism. I’m tired of the defensiveness when I simply shared facts. I realize that things like diet are tied up in a whole mess of identity, family, and politics. But I didn’t say everyone should be vegan. I’m not black and white on it. I just said brutal murder of these intelligent animals isn’t necessary; there is a real arbitrariness in our choices of pets vs food.

This isn’t the first time he has written an unwelcome essay on my wall. I have no interest in being connected to Matt. We aren’t real friends. (Do you realize that Facebook is so powerful that it has redefined “friend”?) I have no interest in passively acquiescing to host Matt’s contentious, speciously academic/curious comments on my bare bones wall.
Of all walls, mine is the least of a free-for-all comment spree inviting debate. It’s not my duty to let Matt post whatever he wants for all my network to see because I’m afraid that deleting his comments or unfriending him might hurt his feelings. His feelings are not my concern because see point A: we’re not friends. My precious mental energy is my concern.

Unsurprisingly, within three minutes, he realized I had and sent me this message: 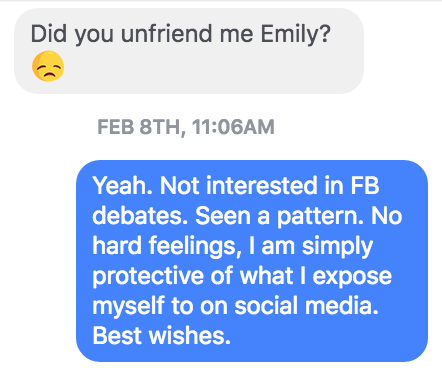 Garbage in, garbage out:

Many of us put up with the unwelcome presence of others who lack etiquette, who seek attention, who abuse social media, who overshare, who depress us, who drain us.

We host them in our social feeds and our lives for the sake of appearances or politeness. We need to filter our inputs better.
Information and energy that we absorb from those around us impacts our moods, ideas, and creativity. Facebook has been proven to depress users. Sometimes Facebook even experiments on users to see how tweaking the algorithm will affect our depression levels. It’s sick stuff. Protect yourself.

If something is a time suck without clear benefit, just unfriend the sucker.

Don’t toe-dip with Facebook’s “take a break” feature. (Kudos to the FB product development team: this fence-sitting middle ground between following somebody and unfriending them is a great way to keep up the average size of users’ networks and ultimately increase engagement).

It doesn’t exist to help the world or create connection.
It can do good and it does connect us. But good is a chance by-product, while certain results include wasted time, news from one’s own echo chamber, and proven depression due to competition and jealousy.
–
After ten years on and off it, when I use Facebook, I unapologetically prioritize my experience over the perceived etiquette of the Matts who don’t deserve my energy.